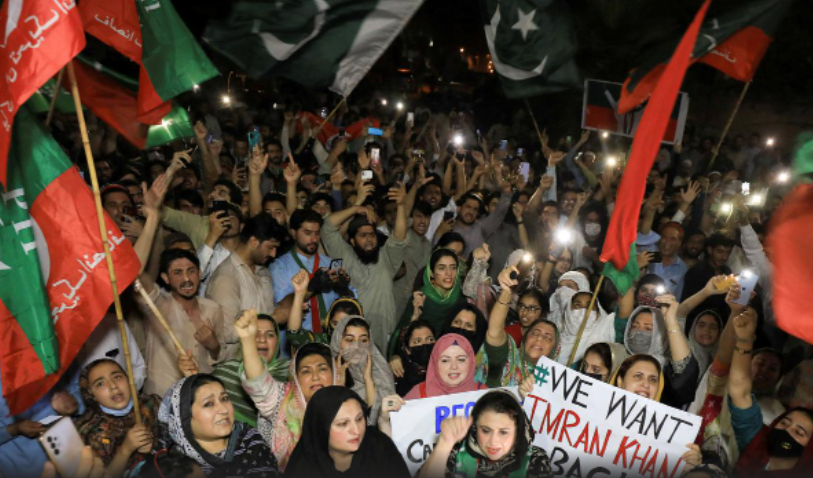 The arrests were made by Pakistan’s Federal Investigation Agency (FIA) on April 12 in different parts of the Punjab Province over targeting of the Army chief and Supreme Court judges on social media.

Mr. Khan was ousted as the Prime Minister after the joint Opposition’s no-confidence motion against him succeeded on March 8. In the days that followed, a campaign against Gen. Bajwa appeared a top trend on Twitter.

According to the FIA, it has received a list of 50 suspects involved in social media campaign against the Army chief and the apex court judges from the intelligence agencies and eight of them have been taken into custody.

Hundreds and thousands of tweets blames the SC chief justice and the Army chief responsible for the ouster of Mr. Khan at the behest of the U.S.

Mr. Khan’s close aide Asad Umar said in a tweet, “Petition challenging the harassment of PTI social media activists has been finalised and will be filed in high courts on Wednesday.” Meanwhile, a meeting of Pakistan Army officials on Tuesday took note of the campaign against the institution on social media and expressed complete confidence in the leadership’s “well-considered stance to uphold the Constitution and the rule of law”.

According to a statement issued from the Inter-Services Public Relations (ISPR), the 79th Formation Commanders’ Conference was held at the General Headquarters that was attended by the army’s corps commanders, principal staff officers and all formation commanders and presided over by Chief of Army Staff (COAS) General Bajwa.

“The forum took note of the recent propaganda campaign by some quarters to malign the Pakistan Army and create division between the institution and society. National security of Pakistan is sacrosanct. Pakistan Army has always stood by the state institutions to guard it and always will, without any compromise,” the ISPR statement said.