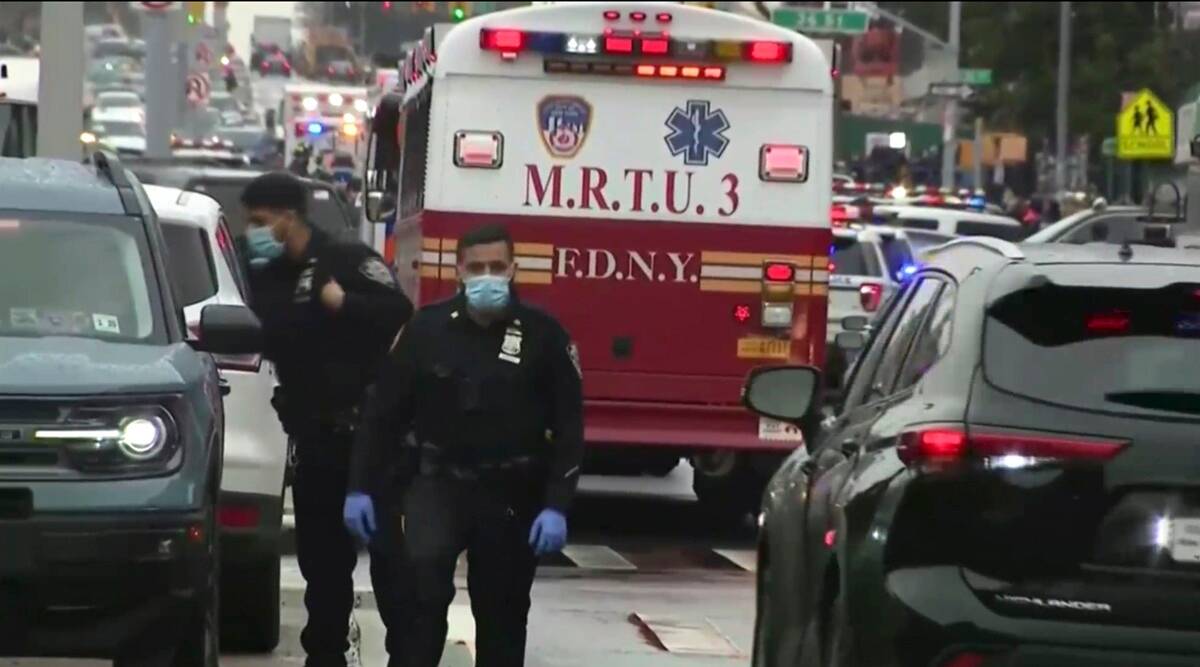 Police and federal agents searched into the early hours of Wednesday, April 13, 2022, for a man who set off smoke bombs and sprayed fellow passengers with gunfire aboard a New York City subway car, injuring more than 20 people before he fled the scene.

The attack erupted during the Tuesday morning commuter rush as the Manhattan-bound "N Line" train was pulling into an underground station in Brooklyn's Sunset Park neighborhood, the latest burst of seemingly random violence that has plagued the city's transit system in recent years.

Police said 10 people were struck directly by gunfire, five of them hospitalized in critical but stable condition, while 13 others suffered respiratory distress or were otherwise injured in the crush of frantic riders fleeing the smoke-filled subway car.

Some injured passengers collapsed as they poured onto the platform of the 36th Street station.

All of the victims were expected to survive their injuries, police said in an evening news conference, in which authorities also offered rewards totaling $50,000 for information leading to the arrest of a suspect they believed acted alone.

The manhunt initially centered around a U-Haul van found hours afterward parked on a Brooklyn street, and on a "person of interest" identified by police as Frank James, who was believed to have rented the vehicle in Philadelphia.

Police said they recovered the key to the van at the crime scene, and that James had addresses in Philadelphia and Wisconsin. Attempts by Reuters to reach any of the phone numbers associated with James were unsuccessful.

New York Police Department (NYPD) Commissioner Keechant Sewell told reporters the shooting was not immediately being treated as an act of terrorism.

There was no known motive for the attack, but investigators found a number of social media posts linked to an individual named Frank James that mentioned homelessness and the New York City mayor, Mr. Sewell said.

The subway assailant was described by police from eyewitness accounts as a man of heavy build, wearing an orange vest, a gray sweatshirt, a green helmet and surgical mask.

The commissioner said the attack began in the train car as it was about to enter the station. The gunman removed two canisters from his bag and opened them, sending smoke throughout the train car.

Police said the man then fired 33 rounds from a Glock 9 mm semi-automatic handgun, which was later recovered along with three extended ammunition magazines, a hatchet, some consumer-grade fireworks and a container of gasoline.