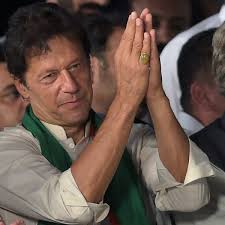 Pakistan's Prime Minister Imran Khan has been ousted as the country's leader following a vote of no confidence over allegations of economic mismanagement and mishandling of the country's foreign policy, bringing an end to his tumultuous term in office.

The parliamentary vote, held Sunday, saw the former cricket star defeated. The opposition needed a minimum of 172 votes out of the 342 member assembly to oust him.

The vote of no confidence was backed by an alliance of politicians including more than a dozen defectors from Khan's own political party.

The vote took place after Pakistan's Supreme Court ruled Thursday a decision to block a previous vote of no confidence against Khan over allegations of economic mismanagement was unconstitutional.

In its decision, the Supreme Court also quashed Khan's earlier order to dissolve parliament and call for early elections, calling it of "no legal effect."

The speaker of the National Assembly will now send a notice to Khan and call for a fresh session of parliament to elect a new prime minister.

In an address to the nation Friday night, Khan repeated unverified claims the vote of no confidence was the result of a "foreign conspiracy" connected to the United States.

Khan said he had been singled out by the US because, unlike his opponents, he couldn't "easily be used as a puppet by the West," with regard to an independent foreign policy. He said he was not anti-American but would not let his nation "be used as a tissue paper" in a "one-sided relationship."

He also called for nationwide protests Sunday against what he claimed was an attempt to "install" a new government by "foreign powers."

On Thursday, the US State Department issued a statement saying there was "no truth" to Khan's claims of interference.

"We are closely following developments in Pakistan, and we respect, we support Pakistan's constitutional process and the rule of law, but when it comes to those allegations, there is no truth to them," the statement said.

Sunday's vote marked the latest escalation in a crisis smoldering for weeks, with Khan already having lost the backing of key political allies and the country's powerful military.

Pakistan, a nation of 220 million, has struggled with political instability since its formation in 1947, with multiple regime changes and military coups. No prime minister has ever completed a full five-year term under the present constitution of 1973.

Khan's ouster comes just short of four years in office and there are now concerns it could raise the risk of political instability in the South Asian nation.

In 2018, after more than two decades of struggles in politics, Khan achieved his long-awaited dream of becoming prime minister, promising a "new Pakistan," and vowing to eradicate poverty and corruption.

His tenure saw him face numerous hurdles, from rising inflation to a global pandemic. Khan's government has also dealt with record slumps in foreign exchange reserves, and last year accepted a $6 billion bailout from the International Monetary Fund.

In 2019, rising hostilities between Pakistan and neighboring India saw clashes between the two nuclear-armed states. But diplomacy on both sides led to a simmering stalemate that lasted throughout Khan's premiership, with much praise going to the Pakistani leader for his professional and peaceful conduct.