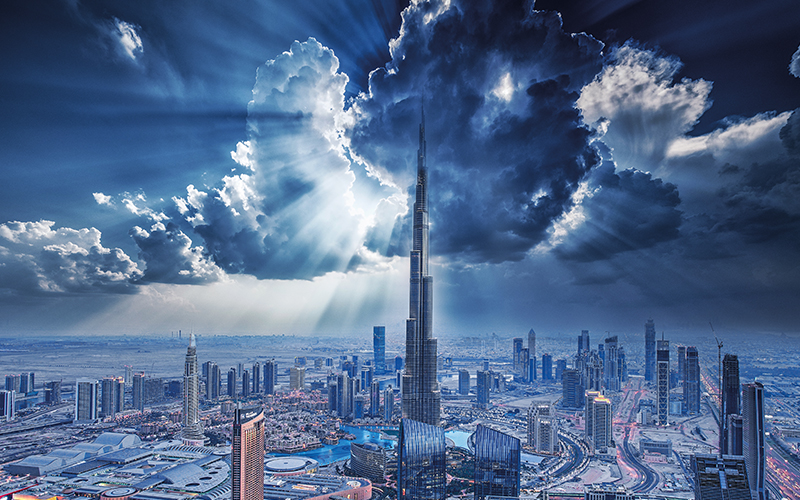 Driving coastward through Mississippi last month, I hit rain. First, it spat at the windshield, a few drops sprinkling down from the sky onto a 2009 Accord. Then the bucket tipped, the road disappearing into smudges of light and water cascading on glass in the milliseconds between frantic wiper swipes. I eased into a doughnut shop’s flooded parking lot and settled in to watch.

I was reminded of that downpour by an arresting series of short videos posted to Instagram last month by the United Arab Emirates’ National Center of Meteorology. In one, we see cars speeding through heavy rain while palm fronds shiver and the sun peers meekly through clouds, casting the scene in sepia tones. In another, we see the effects of a deluge: flooded streets, stationary vehicles, brown water streaming over-sand. A third shows S.U.V.s traversing what appears to be a bumper-deep lake.

It bears repeating that we are looking at the U.A.E. — specifically, at its cutting-edge highways, which are engineered to withstand extreme temperatures, allowing drivers to safely cross the desert on their way to ultramodern cities like Dubai and Abu Dhabi. We might expect to observe heat radiating off asphalt; we might expect sand, swept up by traffic, glinting in the overwhelming brightness. Instead, rain dumps down and bounces from the blacktop. The videographer’s slow pans from side to side seem to channel our incredulity. This is scarcely believable in a country where annual precipitation usually hovers around four inches. It’s as if every detail is being recorded, more than once, so the proof becomes incontrovertible. And whatever surprise you experience at seeing it may redouble when you read, via reports in The Washington Post, The Independent and elsewhere, that this surreal footage was a result of a technology called cloudseeding, which the U.A.E. has been refining for more than a decade.

Those reports may be slightly exaggerated. Cloudseeding traditionally refers to a set of weather-modification techniques in which a substance — salt, or silver iodide, or dry ice — is fired into a cloud to enhance precipitation, not single-handedly create it. For years, this has been done by planes; more recently, unmanned drones have been tried, releasing electrical charges that can have a similar effect. In theory, the seeding creates an attractive substrate for water molecules to coalesce around, forming droplets or crystals dense enough to fall to the ground without evaporating.

The U.A.E. is exploring this technology because its climate is dry and hot, and getting hotter as the planet warms. So far this year, temperatures have topped 125 degrees Fahrenheit in parts of the country. Complicating matters further is the Emirates’ exploding population: From 2005 to 2010, it nearly doubled, to about 8.5 million, and it now hovers around 10 million. More people need more water, and only 4 percent of the U.A.E.’s supply comes from renewable sources. To make up the difference, and to conserve what water it does have, the country has turned to desalination, which is expensive, and to cloudseeding, which is relatively cheap — and, assuming it can work at scale, may have the added benefit of temporarily making both the air and the nation’s social-media content cooler.